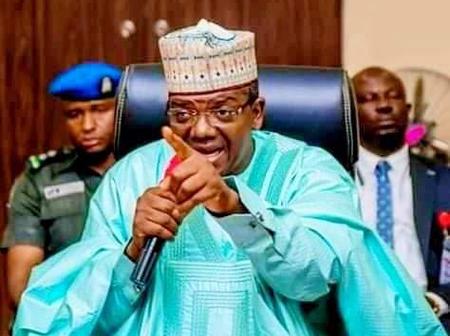 His Excellency, Zamfara State Executive Governor Hon Dr. Bello Mohammed MON (Matawallen Maradun) today vowed to flush out all remaining criminal elements threatening the continued peace that has been achieved as a result of the peace and reconciliation he initiated last year.

The governor’s resolve is part of the fallout of the North West Collaborative Security efforts meeting he attended alongside his colleagues, the governors of the North Western states which held at the Sir Kashim Ibrahim House, Kaduna.

The meeting reviewed all what have been done and the next steps to be taken by the Governors of the region together with all the Security chiefs in order to protect the lives and the properties of their people.

The meeting lauded the efforts of all the State governors in addressing the issues of banditry, kidnapping and cattle rustling that bedeviled the region over a long period of time.

Answering questions from journalists immediately after the meeting Governor Matawalle vowed to flush all the remaining criminal elements in Zamfara State and its environ as his administration will not accept any breach of the peace being enjoyed.

Governor Matawalle further stated that alot has been achieved within the period of his leadership in the state as a result of the peace process initiated by his government.

He called on those who are yet to embrace the peace process to hasten doing so, as his government will soon take full military action against them.

Matawalle also commended the Security agencies for their support and cooperation in the fight against banditry, kidnapping and cattle rustling in Zamfara State and its neighbouring states and urged them to intensify efforts to rid the region from the menace as new measures have been put in place.

Earlier reading the communique of the meeting, the forum Chairman who doubles as Governor of Katsina State, Honourable Aminu Bello Masari said the region will establish a joint Security operations in order to stem the incidence of armed bandits relocating to neighbouring states with a view of having a peaceful region and a United Nigeria.

Masari said the Northwest Governors and those of Niger and Kwara States have agreed to finance the joint Security operations in order to bring an end to the Security situation in the region.

He said the collaborative Security efforts was started since 2016 and a remarkable success has been achieved.

The meeting was attended by Governors of Niger, Kaduna, Katsina, Jigawa, Kebbi,Sokoto and Zamfara while Kano Governor was represented by his Deputy.

The Zamfara State Governor was accompanied to the meeting by the State Head of Service, Alhaji Kabiru Balarabe and his Principal Private Secretary Alhaji Abubakar Jaafar Maradun among others.